"Without DLC, I wouldn’t be where I am today": interview with housing solicitor Matthew Brown 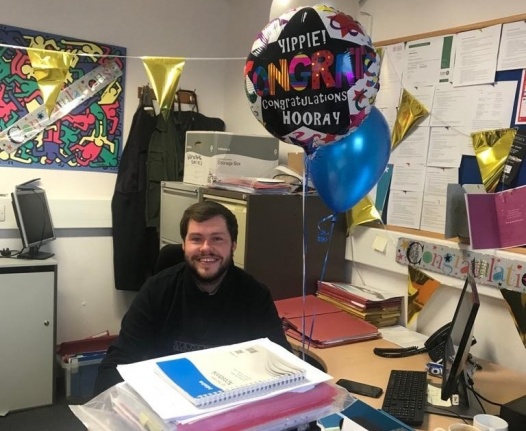 This month, Derbyshire Law Centre (DLC) has welcomed Matthew Brown as a new housing solicitor. Matt originally joined DLC over 5 years ago, starting with a 12-week placement while at university. We interviewed Matt to ask him about what drew him to the Law Centres movement and how he has found his way to becoming a newly qualified solicitor.

What attracted you to the Law Centres movement?

In all honesty, I hadn’t heard of either the Derbyshire Law Centre (DLC) or the Law Centres Network (LCN) when I was at university. My first knowledge of DLC/LCN was towards the tail end of my second year when I was choosing my third year options on my law degree at the University of Derby. One of the options I could choose was a placement for one semester (12 weeks) and I decided to apply for it. There were limited placement opportunities at different firms (mostly private practice) in Derby and Derbyshire, and because demand was higher than opportunities, we had to complete an application in the hope of being selected. On the application we had to choose our top two most desirable firms. After doing some research into both DLC and LCN, I chose DLC as my top choice. Casting my mind back I think it was mostly because of the variety in work that DLC did at the time (housing, employment, debt and immigration) that interested me the most as I didn’t know what I wanted to do after graduating.

What has your journey been to becoming a Solicitor with Derbyshire Law Centre?

I was accepted for the placement module by both the university lecturer that ran the module and by DLC. I started a 12 week placement towards the end September 2016 which was due to run for the whole first semester up until Christmas. I was on placement for one day a week and was thoroughly enjoying my first few weeks of being in the ‘real’ legal world as it was first experience within legal practice. After 3 weeks, DLC offered me a temporary paid paralegal post to run alongside my placement hours. My first day of employment was 24 October 2016. In December 2016, my placement ended but I was offered to chance to remain at DLC as a paralegal until May 2017 whilst I finished my degree.

One of our housing solicitors has previously benefitted from the Law Society’s Diversity and Access Scheme (DAS) so suggested that I apply for this. At the time, the Law Society offered a ‘DAS Plus’ which was on offer for those that had been working and/or volunteering at a Law Centre for a minimum of 6 months. I applied for DAS Plus which would pay for my Legal Practice Course fees and would fund my salary on a training contract at DLC. I applied and was shortlisted for an interview at the Law Society’s HQ on Chancery Lane and was successful. After an already planned summer sabbatical back in my native Norfolk, I started back at DLC in September 2017 on a full time paralegal post whilst I undertook the LPC on a part time basis for two years. I passed the LPC in June 2019 and began my training contract in September 2019. I then qualified on 3 September 2021 and was offered a job as a housing caseworker which means I have stayed on as a newly qualified solicitor!

How have Derbyshire Law Centre developed your skills along the way?

I had no prior legal experience in the real world prior to coming to DLC. Having not learnt any housing law and only a small amount of civil litigation during my degree, I have developed my knowledge of both areas entirely from working at DLC as both a paralegal and trainee solicitor. They have supported me from day one as a placement student in gaining experience within the legal profession and continued to believe in me. Without DLC, I wouldn’t be where I am today. It is an incredible organisation that constantly support career development and progression for employees.

What work are you doing now with the Law Centre, and how are you finding it?

I was offered the role of housing caseworker upon qualifying after Steve Taylor, who had been at DLC since its creation in 1989, retired in August. I learnt a lot from Steve and hope to be able to fill his (big) shoes! I also advise on goods and services discrimination cases additionally. I love the work that we do to help those with housing and discrimination problems. I am supported by fantastic colleagues on a daily basis; although I have been at DLC for 5 years at the end of this month, I am still in the early stages of my career compared to others.

What role can Law Centres play in changing things for their clients?

Law Centres across the country play a huge role in their local communities in ensuring that residents are aware of their legal rights, then helping to enforce them with the specialist advice that solicitors/caseworkers/legal advisers provide. Despite changes in legal aid over the years, Law Centres continue to carry the torch for those that need help the most and the existence of Law Centres is vital to our communities. Specialist advice and project work that Law Centres offer can help people remain in their homes, securetheir employment rights, ensure they get support for any debts they may have and provide support for immigration matters including status to name just a few. Many of these things are intertwined with one another, so the holistic approach that Law Centres take when dealing with issues that clients have ensures that they get the best advice and service possible to change lives for the better.