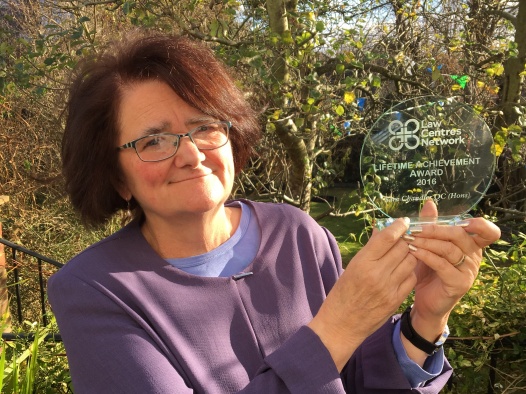 A housing solicitor and visiting professor at London South Bank University was stunned to learn that she had won the Law Centres Network’s Lifetime Achievement Award.

“Sara has been an activist, friend and champion of the Law Centres movement for over 35 years. She was a pioneer in welfare law and was one of the first people to represent a client in the Tribunal, thus helping to develop welfare law and housing law practice. Her work to promote access to justice both in the UK and abroad has been recognised recently by making her a professor at the College of Law and then London South Bank University, and recently also an Honorary QC.

“Sara’s other great love is access to justice, nationally and internationally. This has led to her involvement in legal aid campaigns and pro bono legal projects for the past ten years. She was instrumental in setting up the Colombian Caravana, which promotes justice and the rule of law in Colombia. She is a recognised world leader on this topic and has been invited to speak and represent the UK at conferences, Law Societies and other international conferences.”

“I was thrilled to win this award. I know so many people who work on without pay or in the face of lack of funding, like the staff of Central London Law Centre, where I am a trustee. It is an honour to be a member of the Law Centres movement and I will continue to do what I can for as long as I can. In receiving this award I hope it will remind people that we can all help our Law Centres to survive.”