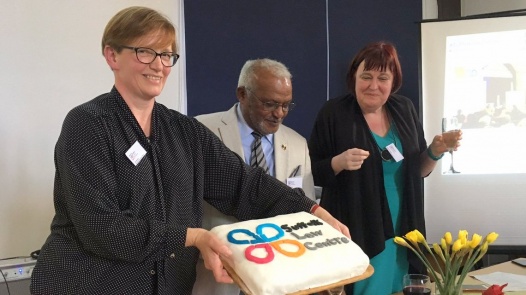 Suffolk Law Centre has today celebrated its official opening to the public with a well-attended event in Ipswich.

Following its admittance last November as member of the Law Centres Network, Suffolk Law Centre has now opened its doors. This is a significant event in a county that has traditionally been a legal advice 'desert'.

Proceedings begain with the local MP, Sandy Martin, unveiling the Law Centre's new sign at its new offices, shared with its parent organisation, the Ipswich and Suffolk Council for Racial Equality (ISCRE).

Following a light lunch, supporters from all parts of the community and beyond assembled in a local hall for the Law Centre's first general meeting.

Among those speaking at the meeting was LCN director, Julie Bishop, who welcomed the Law Centre and recounted its long road into being, following years of ISCRE's association and partnership with LCN and other Law Centres.

We wish our newest Law Centre every success in widening access to justice in East Anglia!