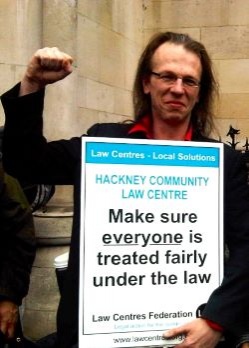 The Law Centres Network mourns the untimely passing after a short illness of one of our own: Nathaniel Mathews, senior solicitor at Hackney Community Law Centre.

Nathaniel has practiced as a solicitor for 27 years, most of them at the Law Centre, where he used his housing specialism to the benefit of disadvantaged residents of east London. For years, he saw clients both at the Law Centre and as duty solicitor at the local Clerkenwell and Shoreditch County Court, where he helped renters avoid eviction and home loss.

Nathaniel also pursued his cases to the higher courts. Two recent examples include Haile in the Supreme Court, which concerned vulnerability and intentional homelessness; and Okoro in the Court of Appeal, which clarified the scope of the Covid-19 stay of possession proceedings. In 2006, his work won him the social welfare Legal Aid Lawyer of the Year award.

A longstanding champion of diversity in the legal profession, over the past decade Nathaniel has tutored, mentored and inspired a generation of trainees, students and volunteers, who have gone on to replenish the dwindling ranks of social welfare law.

In 2016, he was instrumental in the UK’s first legal innovation ‘hackathon’, an intensive 24-hour computer coding challenge, held by the Law Centre in order to find new ways of expanding access to their services.

Nathaniel was also a passionate public advocate for justice. Between 2011-2013, he campaigned extensively against civil legal aid cuts. In 2013, he led a local campaign opposing the Bedroom Tax. In 2015, he and the Law Centre successfully advocated against Hackney Council’s use of Public Space Protection Orders to criminalise rough sleeping in local public parks.

It was always important for Nathaniel to go beyond lawyering proper and to draw attention to everyday injustices. His blog, ‘Frontline Hackney – a Day in the Life of the Law’, related vividly how the rule of law is maintained in sometimes impossible situations; and how the law can benefit many who previously had been hurt by it.

"Nat was the best of us. His exemplary work embodies Law Centres' values. It demonstrates the impact that dedicated community lawyering can achieve. He was as humble as he was erudite, as tenacious on his clients' behalf as he was kind and generous. We miss him terribly already."

Like all who have known Nathaniel and worked with him, we are bereft and offer our sincere condolences to his family and friends.