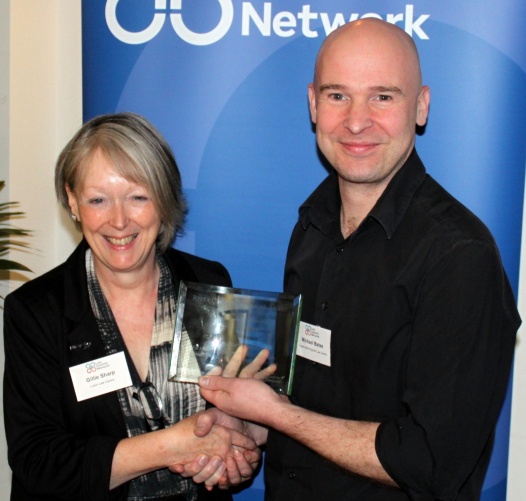 Michael Bates, manager and case worker at the new Birmingham Community Law Centre on Walford Road, Sparkbrook, has won a prestigious award from the Law Centres Network for his tireless efforts in getting the Law Centre off the ground.

Michael was presented with the award by LCN's outgoing chair Gillie Sharp at our annual conference in Birmingham on November 29th.

Michael worked at the old Birmingham Law Centre on Coventry Road for 17 years prior to its closure in August 2013. He was determined that Birmingham should still have a Law Centre so he did not look for another job. He drew up a business plan and approached Coventry Law Centre, who agreed to work with him to establish a Law Centre service in Birmingham. Together, they won support from local and national funders and found free accommodation at the Bangladesh Centre.

After the old Law Centre closed, Michael and a colleague cleaned the new offices, got volunteers to help decorate and moved furniture and files from the old Law Centre. Since opening on 11th September the Law Centre has helped almost 200 people with problems with welfare benefits, debt, community care and public law.

The new Law Centre is funded through a legal aid contract along with donations from the Barrow Cadbury Trust, the Yardley Great Trust, Friends Hall Farm Trust, The Grimmitt Trust, the Harry Payne Trust and the Access to Justice Foundation.

Presenting Michael with the award, Gillie said: “It is thanks to Michael that Britain’s second city has a Law Centre again. This is a firm foundation from which the new service can develop and help more and more people.”