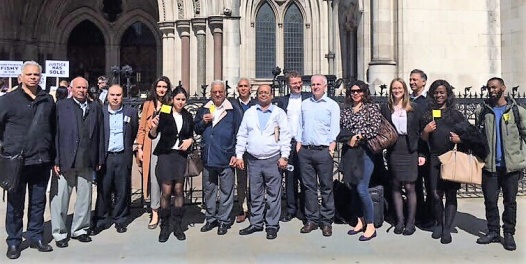 Campaigners with the PILU team outside the Royal Courts of Justice after their hearing.

A judgement handed down by the High Court on Friday, 20 July, has quashed the sale of Southall Town Hall by Ealing Council, which has long been the subject of a community campaign, supported by legal advice from Lambeth Law Centre’s Public Interest Law Unit (PILU).

The old town hall is currently home to 15 tenant organisations, including community-based organisations such as the Southall Community Alliance, the Migrant Advice and Advocacy Service, and Lalis Direct Care. The Town Hall is used by thousands of people every year.

Southall Town Hall is of historical importance for working class people in the area.  It has been used by scores of community organisations over the years. It was the site of anti-fascist meetings in the seventies and it was here that Blair Peach died in 1979 following a demonstration. In 1994, a proposal to sell Southall Town Hall led to a local charity worker going on hunger strike.

The Council had also failed to consider a measure called Circular 06/2003, which gives it the power in certain circumstances to sell buildings for less than the best price. This power is particularly important to consider where the interests and needs of the local community are at stake.

“It’s likely now that the Council will have to start the bidding process again or may even decide to take an alternative course of action – working with, rather than against, community organisations.

“The decision of the High Court makes clear that councils across the UK must place the communities they serve at the centre of their decision-making. This is a great victory not only for people in Ealing and the Save Southall Town Hall Campaign, but for anti-austerity campaigners generally, as the community value and the use of buildings must be properly considered before being sold off to the highest bidder."

The legal challenge was funded by legal aid, with a contribution of some £5,000 raised by the local community. It is another successful legal action by PILU, which specialises in public law, human rights and public inquiries. PILU acts for individuals and campaign groups who have been treated unlawfully by public bodies.