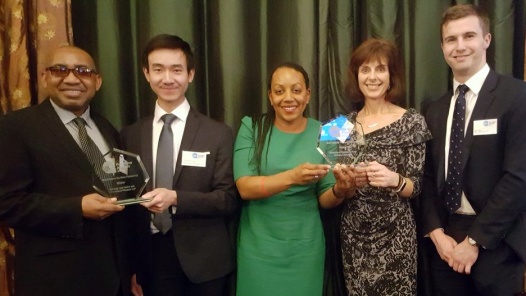 The LawWorks awards celebrate the voluntary professional work done for the public good (pro bono publico in Latin) that is at the heart of the culture of the legal professions.

This year the awards ceremony was held at the Law Society of England and Wales headquarters on Chancery Lane. Hosted by the BBC’s Paddy O’Connell, the ceremony also featured a lecture by Hilarie Bass, president of the American Bar Association, the world’s largest professional organisation.

In April 2016, Haringey Law Centre was nearly forced to close after the local authority withdrew its funding. Despite this, some of the staff team continued to work as unpaid volunteers. Lawyers from Debevoise & Plimpton decided to help them by setting up a project to advise local residents on disability benefits appeals (PIP and ESA), as well as providing funding.

The awards judges commended staff and volunteers for being “both inventive and resilient” and for providing “a high quality much-needed service for local people”. One of these was Pauline who, despite suffering with Lupus, Fibromyalgia and other conditions, was refused the sickness benefit ESA. The volunteer lawyers helped her appeal and this decision and secure her livelihood, an outcome which she finds “amazing!”

This was not the only award that evening to involve Law Centres.

Technology giant Microsoft’s legal team won the best in-house team contribution, for their help in setting up the charity Kids In Needs of Defense (KIND) UK – which is a collaboration between American KIND, Central England Law Centre, Islington Law Centre’s Migrant and Refugee Children’s Legal Unit and Coram Children’s Legal Centre. KIND UK helps migrant children in the UK secure their right to reside in the country, securing them and sometimes also their parents access to services vital to their wellbeing.

The award for best contribution by an individual went to Rebecca Greenhalgh of law firm Ashurst and Felicity Kirk of firm Ropes & Gray. In June, the two pro bono leaders responded quickly and decisively to the Grenfell Tower disaster by co-ordinating the pro bono support for the local North Kensington Law Centre, which supports survivors of the fire. Grateful for their involvement, the Law Centre is “confident that the pro bono response... was as effective as it could have possibly been.”

“Each of these awards showcases the invaluable support that pro bono offers Law Centres. They also demonstrate the key role that Law Centres have in leveraging pro bono legal support for the benefit of people and communities.

“The legal aid cuts would have been felt much more sharply without these inventive, dedicated partnerships. These contributions are a credit to legal professionals – and an indictment of the government’s justice policy, which is in urgent need of reform."