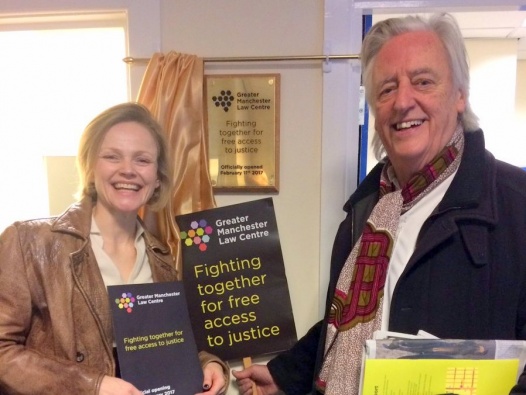 The newest member of the Law Centres Network has held its official launch event on Saturday at a community centre in Moss Side, Manchester.

Greater Manchester Law Centre is the third Law Centre to open after cuts to legal aid were introduced in April 2013, leading to the closure of 11 Law Centres. Manchester had previously been served by several Law Centres, but for some time the cuts have left it without any.

The new Law Centre has a double aim: to provide local residents with legal advice and through it access to justice; but also to serve as a campaign for the establishment of more Law Centres across the country, to address widespread need.

The packed launch event included contributions from two star patrons of the new Law Centre: actress and social activist Maxine Peake; and eminent human rights barrister Michael Mansfield QC. For Mansfield this is some return to form: in the 1970s, he was also instrumental in the setting up of what is now Haringey Law Centre.

Celebrations started with a procession through Moss Side under the Law Centre's banner, ending at the West Indian Sports and Social Club. There the 500-strong crowd enjoyed performances from the local talents of the Holy Name RC Primary School steel band, DJ Kemoy and the WAST (Women Asylum Seekers Together) choir.

“In Greater Manchester Law Centre the city regains a precious asset, that public funding cuts have deprived it. Its establishment is a testament to local initiative and tenacity, and to the value that people attach to equal justice for all. We extend a warm welcome to the Law Centre and urge everyone in Manchester to embrace and support it."