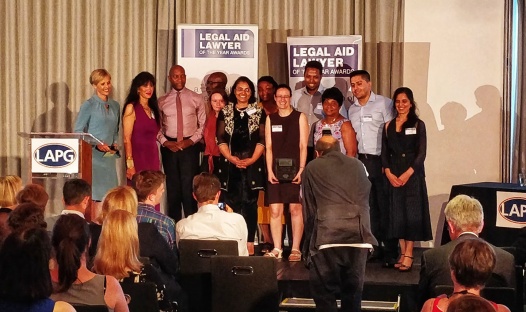 After only five years of operation, Ealing Law Centre, of Northfields in west London, has won the Legal Aid Lawyer of the Year (LALY) award for best firm/not-for-profit 2018.

The awards, given by the Legal Aid Practitioners Group (LAPG)  are held annually to celebrate excellence in public-funded legal work. They are an annual highlight of the social justice lawyering community in England and Wales.

Ealing Law Centre was the brain child of solicitor Sue James, last year's winner of the oustanding achievement LALY award. Sue works at Hammersmith and Fulham Law Centre, and has lamented that her home borough of Ealing had become an 'advice desert', with no local agencies to provide legal assistance.

The new Law Centre opened its doors in April 2013, on the day that the government cuts to civil legal aid came into effect. Since then it has grown steadily and expanded its services to local residents. A major endorser of its nomination for the LALY was Virendra Sharma, the local MP for Ealing Southall.

Also shortlisted for a LALY in the same category was Ealing's younger sister, Greater Manchester Law Centre. As another Law Centre that opened after the civil legal aid cuts, it has a similarly defiant story of succeeding against a harsh landscape of unmet needs and limited resources.

The LALY awards ceremony, held in the City of London, also acknowledged the work of Law Centres in other ways. Opening the ceremony, Jenny Beck, co-chair of LAPG, paid tribute to two recent Law Centre legal victories and their impact on the wider legal aid community: the Law Centres Network's challenge to Housing Possession Court Duty Scheme changes - which led to them being abandoned; and Islington Law Centre's challenge to scope definitions, which led to the reinstatement of legal aid for separated migrant children.

"We are absolutely delighted for Ealing Law Centre and the rightful recognition of its achievements. A small and young outfit, it is a model of local initiative, dedication and grit in the face of tough challenges.

"We must all keep up the fight for social justice. If you have no local Law Centre where you live, take action: follow Ealing and Greater Manchester's examples, contact us, and set up a new one. Your community will be the richer for it."