Didn't they do well? Two Law Centre finalists and a winner in legal aid awards 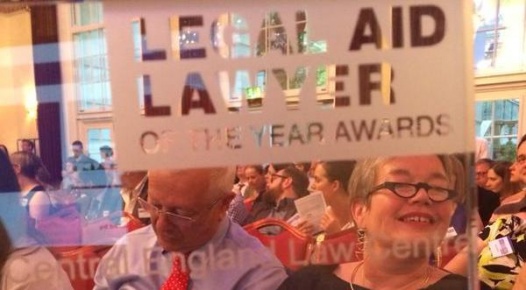 Last night saw a fine result for Law Centres at the Legal Aid Lawyer of the Year (LALY) awards ceremony. Out of three finalists shortlisted for the Legal Aid Practitioners Group coveted awards, Central England Law Centre has won the best firm/not-for-profit of the year accolade.

Nominated by Stephen Knafler QC, joint head of Garden Court Chambers, the Law Centre was praised not just for its strategic approach to legal action but for its team spirit and camaraderie. True to type, not only did the Law Centre send a large contingent to the award ceremony, but they have also had their youngest team member, Alex, accept the award on their behalf, as the voice of Law Centres' next generation.

In recent years Coventry Law Centre has been going from strength to strength. A leader of its local advice network, Advice Services Coventry, it was recently selected for a five-year pathfinder project on early action in local communities. They have been collaborating successfully with local charity Grapevine on a Young Migrant Rights project, and have also taken part in the first Legal Education Foundation's Justice First Fellowships.

Also shortlisted for LALYs were immigration specialist Roopa Tanna of Islington Law Centre, for the public law award; and housing solicitor Lisa Haythorne of Derbyshire Law Centre, for the newcomer award. Praised as 'a diamond', Roopa has had success this year in challenging the Legal Aid Agency's scope restrictions in family reunification cases. The achievement did not go unnoticed, though, as Alison Pickup of Doughty Street Chambers, whom Roopa had instructed on the case, scooped up the barrister of the year award.

Lisa Haythorne is a consummate legal aid professional with an eye for the bigger picture. An alumna of the Law Society's Diversity Access Scheme, she was lauded as dedicated and meticulous, often leaving barristers she instructs no additional work other than presenting the case in court. Another lawyer who, like Lisa, had started his legal career in Law Centres, was recognised last night: Noel Arnold of Coram Children's Legal Centre, who has tweeted that he is 'very proud to have "grown up" in Hackney Community Law Centre.'

The awards ceremony was held at the grand Plaisteres Hall in London. The livery company's motto 'let brotherly love continue' seems particularly apt to the collegial and collaborative spirit of legal aid professionals. We also take it as a sign that, as the ceremony was held on the hottest July day on record, legal aid lawyers can certainly take the heat.

Our warm congratulations go out to all winners and finalists for their outstanding achievements, and to Carol and LAPG for a great night!

(Photo: Sue Bent, director of Central England Law Centre, and its patron, shadow Attorney-General Lord Bach, seen through the prism of their award, as shot by Michael Bates.)