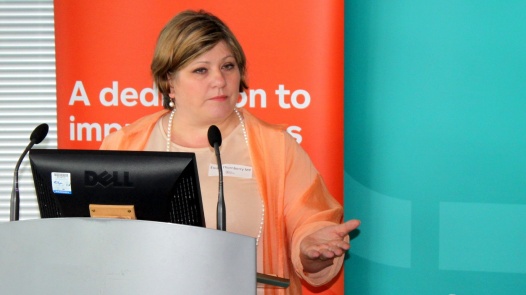 A  new academic study of Law Centres and their vital role in providing access to social justice was launched on Friday, 27th June.

Speaking for the authors of “Access to Justice for Disadvantaged Communities” (Policy Press, 2014), Professor Marjorie Mayo of Goldsmiths, University of London said, “access to justice for all, regardless of the ability to pay, has been a core democratic value. But this basic human right has come under threat through recent social policies.”

Professor Mayo has praised Law Centres' inventive adaptation to changing circumstances, but added that this needed ongoing support from central and local government.

Shadow Attorney General Emily Thornberry MP (Islington South and Finsbury) was the keynote guest speaker (pictured). A barrister and a veteran of not one but two Law Centres, she spoke of the difficulties of helping local people get effective access to justice.

Ms Thornberry regretted that "we do not have sufficient funds to reinstate legal aid" as it had been before the 2013 cuts. However, she praised Law Centres' work and their value to their communities, reaffirming her commitment: "I do understand. You do have a friend here."

Also speaking was Ruth Hayes, director of Islington Law Centre and vice-chair of the Law Centres Network, whose Law Centre serves Ms Thornberry's constituency, among others. Ms Hayes spoke of the importance of local collaborations that Law Centres have with their MPs, local authorities and other advice and support organisations.

The book was welcomed by an audience of politicians, academics, trade union officials, Law Centre staff and trustees, and other members of the legal community.

The Law Centres Network thanks law firm Allen & Overy, in particular Ed Murray and Helen Rogers, for hosting the event and for their ongoing support for Law Centres.